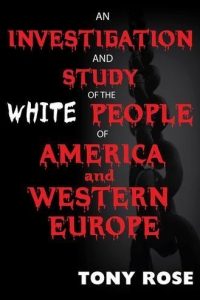 INTRODUCTION:
AN INVESTIGATION OF DONALD TRUMP AND “THE WHITE MAN”

“The White Man” is a ridiculous, ignorant, dangerous and murderous person who doesn’t know that everyone in the world laughs at his need for greed, world conquest and power. While all the time, dragging around the world his white, blonde, blue eyed Jesus.  Praying to a white Jesus and a white God, when everyone knows that Jesus was a first century Hebrew from Judea, a Middle Easterner Levantine, who was a man of “brown complexion and lank, wooly hair”, and that God who is everywhere and everything has no color.  Yet “The White Man” will fight, kill and die for this ignorant, laughable belief and pray to a God and Jesus he thinks is in his white image.

For hundreds of years, Black people have lived with so much terror, terrorism and racism from “The White Man” in the United States of America, that the World Trade Center, 9/11, although horrific, was nothing in comparison to the terror that has been imposed by “The White Man” on our African forefathers and African Americans throughout the history of America.

The countries and people of color in the Middle East, Asia, South East Asia, Africa, India, the South Pacific, the Caribbean, the Native People of North and South America, the Aborigines of Australia, New Zealand, New Guinea, the Eskimos or Inuit people, the Hawaiian Islands, all hate the name “The White Man” and all hate “The White Man” who came to their countries with their wars, death, disease, racism and prejudice, lies, terrorism, religion, guns and weapons and pillaged, raped, enslaved, murdered, belittled their culture and stole their land.

I’ve been told that a lot of younger “White Men” don’t know, don’t understand what all the commotion is about in America with Black Lives Matter and around the world.  Their history books in high school tell them that “The White Man” is privileged and powerful and has only brought good and heroic values to the world, and that the world that should love them, is just jealous of them.

This book will tell you why “The White Man” should cleanse himself and remove the stigma, stain, horror and disgrace of his name “The White Man” forever, into perpetuity, by beginning the process of calling himself what he is, a “European American Man”.  But, he won’t because what “The White Man” name represents to him is power and white privilege over the Black and colored masses of the world.

I was wondering if “The White Man” had cried over the hundreds and hundreds and hundreds of millions of African and African Americans he terrorized, enslaved, brutally killed, raped, murdered, pillaged, stole from, segregated, red-lined, ghettoized, performed institutional racism and intergenerational poverty on for over five hundred years, emotionally and physically destroyed a whole culture.

I wondered did “The White Man” cry for the destroyed families and the mass selling of tens of millions of brutally whipped, beaten and raped Black Slaves in America.

I wondered did “The White Man” cry when he watched his government of the United States of America through acts of Congress parcel out and give millions and millions and millions of acres of land, free and superior education, agriculture and subsidies in the north, south, West and the Midwest to its white peasants and immigrants from Europe. Underwriting “The White Man” of America, with bank loans and an economic floor plan that lasts to this day, while giving nothing, absolutely nothing to its poor Black masses, except ghettos, projects and prison. Did you cry then?

Donald Trump, currently running for President of the United States of America, is the epitome of “The White Man’s”, white privilege and power in America. He is a throwback to every “White Man” who terrorized, demoralized, massacred, enslaved, raped, abused, and destroyed every Native American and African American in America.

He is what every “White Man” in America wants to be again. They, “The White Man”, want America back so that they are free to keep all the colored people in their place. Free to be cruel harbingers of racism and prejudice.  Free to take away every right, African Americans, Native Americans, Hispanic Americans and Asian Americans have lived, fought and died for in the tens of millions to get.  Free to make America “The White Man’s” domicile and round up, keep in our place, deport, destroy, keep jobless, poor, and begging to our so-called white masters and free to be politically incorrect.

These ignorant white people actually believe that Donald Trump cares about them and will make America white for “The White Man” again and when Donald J. Trump becomes the President of the White People of the United States of America, he damn well will do all that for “The White Man” and much, much, more.

Donald Trump’s ‘Make America Great Again’ slogan is a call to all racists and White Supremacists that he will take America back to the good old days of White oppression and terrorism. He the great Donald Trump will ‘Make America White Again’ for “The White Man”.

Donald Trump is a wealthy, stupid, racist, greedy, evil, vicious, fat, ignorant, white bully, who has little regard for anybody, much less African Americans, and if elected will prey upon the weakest and poorest of men. He is a man born to great privilege and wealth, who is selling himself as a man of the white people of America.  He is ready to be their leader, much as Hitler was ready to lead the white people of Germany.

He is saying what “The White Man” in America secretly wishes and wants, much like Hitler did in Germany, which is to dominate and control the world with his White Supremacist views and subjugate all the people of color in it.

“The White Man” has been responsible, since they crawled out of Greece and Rome, for wars that have brought suffering and death to countless trillions of people on earth. But, there was no greater mass murderer and serial killer than Adolph Hitler, who much like Donald Trump is preying on the lower middle class of America, Hitler preyed upon the lower middle class Aryan white people of Germany; telling them to take their country back, to make Germany great again, and led them to the slaughter and destruction of hundreds of millions of people all over the world, including themselves.

And now right here in America, Hitler has been reborn in the form of a wealthy white privileged, German immigrant scion, “White Man”, named Donald Trump and the white media can’t get enough of him, thinking he is just some harmless asshole.

If elected President of the United States of America he will bring more death, destruction, poverty, abuse and terrorism to untold millions of Black people and people of color in this country and around the world. This is secretly, under the covers, in the night, what “The White Man” of America really wants.  He will keep his promise to “The White Man” and along with America’s white police force, keep the Black ghettos and projects of America under siege and terrorized.

The true and detailed story and history of the atrocities and horrors of what the White people of America and Western Europe did to West Africa, Africa, and its people for over five hundred years and the destruction of generations of hundreds and hundreds of millions of Africans, including African Americans in America and those of African descent around the world,  has never really been told.

Who these White people were;  What they were;
Where they came from; What made the White people of Western Europe and America go crazy and have a blood lust and hatred for Africans, Africa, African Americans and people of African descent, to enslave, colonize and subjugate them for over five hundred years has never been told. UNTIL NOW!​

The story of an African American child and young teenager growing up in the real ghetto, the housing projects. Coming from a dysfunctional and violent family where contrary to what poor Black people are always depicted as; there is no God, no church on Sunday, no marching with Martin Luther King, Jr., and no singing in the church choir.

This is the story of tens of millions of African American children locked away, in the segregated, red lined ghettos and housing projects of America. Living in a bad environment, in horrific conditions, with bad parents, in bad schools, where death rides hard and is known by everybody.