America The Black Point of View: An Investigation and Study of The White People of America and Western Europe & The Autobiography of an American Ghetto Boy – The 1950’s and 1960’s –
From the Projects to NAACP Image Award Winner, Volume One 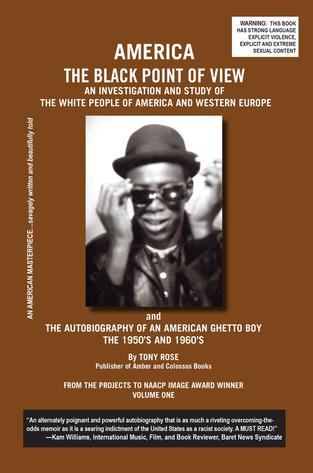 Impressively well written, exceptionally and effectively organized and presented. As informed and informative, as it is thoughtful and thought-provoking.  Should be a part of every community and academic library,
​ – James A. Cox, Editor-in-Chief, Midwest Book Review

Overall, the memoir and prose is vigorous and vivid, and sometimes pungent, scabrous, and sexually graphic.  It leaves a lasting impression of the chaos, deprivation, and psychic ravages of the ghetto, but also gives readers a more nuanced, three-dimensional view of its social life and its people.  A sometimes-distorted and sometimes-revealing portrait of a nightmarish United States.
– David Rapp, Kirkus Book Review

America The Black Point of View: An Investigation and Study of The White People of America and Western Europe & The Autobiography of an American Ghetto Boy –
The 1950’s and 1960’s
From the Projects to NAACP Image Award Winner, Volume One

In this Investigation and Study of the White people of Western Europe and America, Tony Rose takes you on a four million year autobiographical and historic journey of great beauty and even greater horror.

I found out early on that this was not going to be an easy book to write. I wanted to write an autobiography about my early childhood and teen years and the horrific murderers, pimps, gangsters, drug dealers, drug addicts, rapists, child abusers and thieves, that I grew up with, lived with, called family, and write about in The Autobiography of an American Ghetto Boy. I soon realized that I could not write about me as an African American child and teen living in America, without writing about White America, what it was like when I was a child, how it shaped the people around me and what it is like to now live in America, which for tens of millions of African American children is horrific, terrifying, and not so very different than it was for me as a child.

I also wanted to write about what it was like for a child and young teenager to grow up in the real ghetto, the projects, and come from a dysfunctional and violent family where contrary to what poor Black people are always depicted as; there was no God, no church on Sunday, no marching with Martin Luther King, Jr., and no singing in the church choir.

I have written this book to show how White racism and White supremacy affected the lives of the people I lived and grew up with. Also as a study of 70% of White people and their genetic ability to hate people who are different than them, and I also had wondered if there had ever been a study based on the White People of America.

I also realized that because I was writing an autobiography that I could not and should not leave out the history of my forefathers, my ancestors. That any autobiography from an African American should include my/our forefathers going all the way back to Africa and include the story of what Western Europe and the United States of America did to my African ancestors in Africa and on their journey to America in Slave Ships and include their life in America through Slavery, Cultural Destruction, Emancipation, Reconstruction, Jim Crow, Segregation, Institutional Racism, Inter-Generational Poverty, the Civil Rights Era and the Obama Era.

And I also wrote this book, because, I always hear White American politicians and people always asking this one basic question, ‘What is wrong with Black People?’, so because I am a Black people, I thought that I would make an attempt to answer and explain the question ‘What is wrong with Black people’.  Well the answer is White people and the explanation is inside this book.

So the true and detailed story of the atrocities and horrors of what the White people of America and Western Europe did to West Africa, Africa, its people for five hundred long years and to the generations of hundreds and hundreds and hundreds of millions of Africans, those of African descent around the world, including African Americans, has never really been told.  Who these White people were, what they were, where they came from, what made the White people of Western Europe and America go crazy and have a blood lust and hatred for Africans, Africa, African Americans and people of African descent, to enslave and colonize them for five hundred years has never been told.

It is my hope that the poor, underprivileged, disenfranchised, African Americans in the housing projects and ghettos of urban and rural America and Black Africans throughout West Africa and Africa and the poor People of Color around the world who have been put into generational poverty and cultural destruction through the hypocrisy and greed of the White People of Western Europe and America will by reading this book know that they have nothing to be ashamed of. That the shame is on every White person of Western European and White American background who walks the face of God’s green Earth.

And, I wrote this book, because 70% of the White people of America have never, ever, had to or been made to take responsibility or to atone for their sins and the atrocities, horrors and sins of their ancestors. In fact White people still continue to malign Black people, disrespect Black people, make fun of Black people, pass laws that would hinder and take away Black people’s affirmative action and voting rights. All the while, even though the 30% of the White people of America who mean well and try to do everything they can to right the wrong that America has done, still allow their Politicians to continue to blame and make fun of that poor Black mother with three children on food stamps as if she was the cause of all the United States’ ills.

Yet America still gives tens and tens of millions of dollars to some tribesmen in Iraq, Syria, and Afghanistan and billions and billions of dollars to other nations and their armies in Egypt, Israel, Pakistan, Iraq, Syria, Afghanistan and Iran, while here in America our military veterans are sleeping in the street and working parents can’t make enough to feed their children healthy food and the masses of Black people in America have nothing, but a rat’s nest, fucking project or ghetto apartment.

These same White politicians have continuously belittled and look down on, lied to, cheat and blame Black people for everything wrong with America, with a smugness that always suggests and says that no atonement, reparation or thought for Black people is necessary for anything, especially the horrors of slavery, Jim Crow and segregation, and that our ancestors’ pain, suffering and blood for this country does not and did not matter. So I thought I would write a book that also tells Black people and especially White people why reparations and atonement from White people and the United States Federal Government is necessary.

And finally I thought, well, everything else has been done to try to repair Race Relations between Blacks and Whites in America; so I thought that I would try to do something different than had ever been done before.

After you have read the, An Investigation and Study of the White People of Western Europe and America section of this book, my hope is that White people and Black people will finally understand what happened and why.  And that with the knowledge both cultures, both so-called races, will begin a dialogue that can be truly open and honest. Please let me know if I have done that. You can email me at amberbk@aol.com when you have finished reading the book.

Rose’s history of slavery and racism, contains much truth.  However, it also contains exaggeration and stereotyping of people of European descent, whom he characterizes as “primitive, barbaric, vicious white monkeys, who, descended with the horrors of their psychotic desires and thirst for blood, rape and death on so-called uncivilized African and people of color throughout the world.”  He calls for reparations, and urges African-American youngsters to avoid drugs and crime and get an education; less constructively, he suggests that “whenever we meet or see a white man we should all just spit on him for the death of our millions of ancestors.”

The volume’s second part, recounts Rose’s grim upbringing in the purgatory of Boston’s housing projects.  He writes of being perpetually hungry; abandoned by his father, a career pimp and mob hit man who was often in jail; regularly beaten by a mentally unstable mother; and preyed upon by merciless gangs—until he joined one and started committing robberies

“Tony Rose’s powerful autobiography about growing up in the Whittier Street Housing Projects in Roxbury. I can’t put it down, the book is written with such passion.  I get so emotional about triumph and this book is a triumph.”
– Kay Bourne, Arts and Entertainment writer and critic, and
The Boston Theater Critics Association, “2015 Elliot Norton Award” recipient.

America The Black Point of View: An Investigation and Study of The White People of America and Western Europe & The Autobiography of an American Ghetto Boy – The 1950’s and 1960’s
From the Projects to NAACP Image Award Winner, Volume One

The story of an African American child and young teenager growing up in the real ghetto, the housing projects. Coming from a dysfunctional and violent family where contrary to what poor Black people are always depicted as; there is no God, no church on Sunday, no marching with Martin Luther King, Jr., and no singing in the church choir.

This is the story of tens of millions of African American children locked away, in the segregated, red lined ghettos and housing projects of America. Living in a bad environment, in horrific conditions, with bad parents, in bad schools, where death rides hard and is known by everybody.